We launched the Green Fund with the following purposes:

Donate a tree to Nature!

With the planting of the first seven trees on 17th of October 2008 was established "The Green Foundation" at the resort of "St.St.Constantine and Elena".

The initiative is within the framework of celebrations devoted to the 100th anniversary from founding of the first Bulgarian seaside resort of "St.St. Constantine and Elena" and it aims to treasure and enrich the park environment in the complex.

Saplings of the kind Lagerstroemia indica were planted by the District Governor Hristo Kontrov, Bishop of Varna and Veliki Preslav Clerical District d-r Kiril, and the President of Varna Tourist Chamber, associated professor Marin Neshkov. The journalist guild will commensurate with the high branches of the young maple tree, to which it gave life in the complex park. A maple was planted as well by Nikolai Nikolaev - vice president of Supervisor Committee of "St.St. Constantine and Elena" AD.

The act of planting a tree is one of the Human Symbols along with the building up of a home and bringing up of a child. In"The Green Foundation" of the resort of "St.St.Constantine and Elena" every Bulgarian or a foreigner may plant one or several trees for different occasions, symbolizing a new beginning - the birth of a child, marriage, birthdays or other occasions for themselves, of locals and friends. The planting of a tree is also a wonderful occasion to teach our children to love Nature. By the sapling there will be a sign with the name of the person, in whose honor the tree was planted. Every one who has planted a tree will get a special certificate, verifying the kind of tree and the name of the person, for the sake of whom it was done. The creation of an entire forest is possible as well, in the name of a specific person. After the planting, a professional crew of park workers will take care of the young plants. The aim of creating "The Green Foundation" is to preserve and enrich the park at the complex, by encouraging the guests to have a private interest and thus safeguarding the green treasure of the resort. The park "St.St. Constantine and Elena" is taking its present-day view by stages. Its start was set by a resolution of Varna Region Permanent Commission in 1912, when the municipal architect of Varna was assigned to draw up an integral plan of the resort development. The oldest tree in the complex is a centennial sycamore, which is in the yard of the International Home of Scientists "Joliot Curie" and is given the statute of a tree under protection.

Give your support to our idea to preserve the green appearance of the resort complex of "St.St. Constantine and Elena". 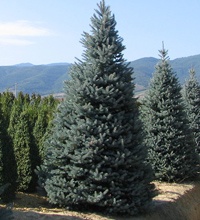 Picea pungens, also known as the Blue Spruce or Colorado Blue Spruce, is a species of spruce native to the Rocky Mountains of the United States. It is a common horticultural tree in northeastern United States, and southeastern Canada. 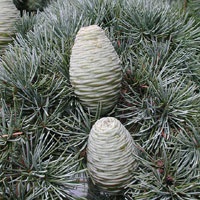 Cedrus deodara is a species of cedar native to the western Himalayas in eastern Afghanistan, northern Pakistan, northern India, southwesternmost Tibet and western Nepal, occurring at 1,500–3,200 m altitude. It is a large evergreen coniferous tree reaching 40–50 m tall, exceptionally 60 m with a trunk up to 3 m in diameter. It has a conic crown with level branches and drooping branchlets. The leaves are needle-like, mostly 2.5–5 cm long, occasionally up to 7 cm long, slender, borne singly on long shoots, and in dense clusters of 20-30 on short shoots; they vary from bright green to glaucous blue-green in colour. 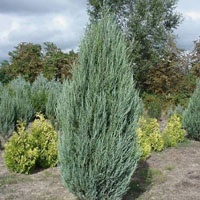 This plant has a tall and extremely narrow, columnar growth habit. Its short, compact, silvery blue foliage is evergreen with virtually no change from season to season. It's a very striking, dramatic plant when used as a cluster planting against a large fence or building or in formal plantings. The tallest, narrowest juniper out there. Beautifully elegant for use around large entryways, gates, or even just to hide that old gutter downspout. FAST GROWING!!!! 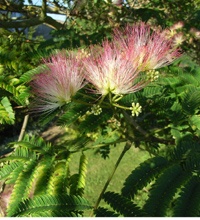 Albizia is a genus of about 150 species of mostly fast-growing subtropical and tropical trees and shrubs . The genus is pantropical, occurring in Asia, Africa, Madagascar, America and Australia, but mostly in the Old World tropics. In some locations, some species are considered weeds. They are usually small trees or shrubs with a short lifespan - though the famous Samán del Guère near Maracay in Venezuela is a huge Albizia saman specimen and several hundred years old. The leaves are pinnately or bipinnately compound. Their small flowers are in bundles, with stamens much longer than the petals. 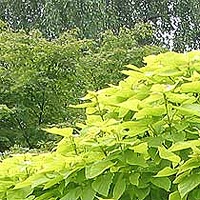 Catalpa bignonioides is a species of Catalpa that is native to the southeastern United States in Alabama, Florida, Georgia, Louisiana, and Mississippi. Common names include southern catalpa, cigar tree, and Indian bean tree. It is a medium-sized deciduous tree growing to 15–18 metres tall, with a trunk up to 1 metre diameter, with brown to gray bark, maturing into hard plates or ridges. The short thick trunk supports long and straggling branches which form a broad and irregular head. The roots are fibrous and branches are brittle. Its juices are watery and bitter.The leaves are large and heart shaped, being 20–30 cm long and 15–20 cm broad. 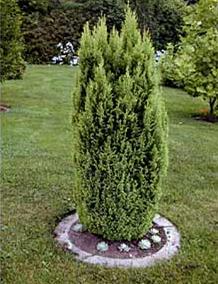 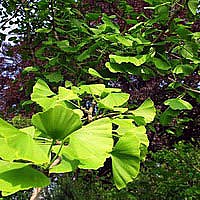 Ginkgos are large trees, normally reaching a height of 20–35 m, with some specimens in China being over 50 m. The tree has an angular crown and long, somewhat erratic branches, and is usually deep rooted and resistant to wind and snow damage. Young trees are often tall and slender, and sparsely branched; the crown becomes broader as the tree ages. During autumn, the leaves turn a bright yellow, then fall, sometimes within a short space of time (one to 15 days). A combination of resistance to disease, insect-resistant wood and the ability to form aerial roots and sprouts makes ginkgos long-lived, with some specimens claimed to be more than 2,500 years old. 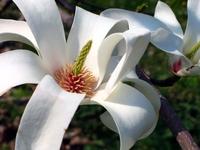 Magnolia kobus blooms in the early spring, bearing pleasantly fragrant white flowers with hints of pale pink about 10 cm in diameter. The flowers are produced before the leaves, as with most members of Magnolia subgenus Yulania. Young trees do not flower. The summer foliage of the Kobushi magnolia is dark green. Leaves have an obovate shape with a pointed tip, a smooth, or glabrous, leaf underside, and smooth, even edges. Leaves are 8–15 cm long, in an alternating arrangement. In autumn, the leaves take on a yellow color and drop from the tree.Magnolia kobus in flower, with a singular blossom in the foreground eclipsing an array of blossoms in the midground, over the backdrop of a waterway. 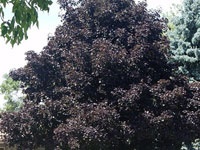 The tree reaches a height up to 12-15 m and spreads its shadow over 8-10 m. It is popular because of the color of its crown, which is green-purple in summertime. Leaves acquire bronze to dark brown touch before falling down in autumn. The crown oval is sprinkled with yellow-auburn flowers in spring. Acer platanoides Crimson King makes a thick shadow and has an almost symmetrical crown.

It is grown in places protected from violent, dry wind, which destroys its tender leaves. Magnolia is thought to be a "difficult" plant. It grows slowly and in a long period of time it reaches 6 m in height. It blossoms between July and September with creamy-white flowers. Some species withstand to 25ºC.

A big bush or a small tree which sheds its leaves, and which opens its blossoming splendor only if summers are warm and sunny and autumn days are golden. Flowers are white, pink, red, purple and beautifully curled, depending on the kind and appearing just over the tops of thick, one-year stems. The dark green leaves are oval, the branches are tetrahedral and the stalk is shiny like silk. It blossoms from August till October. 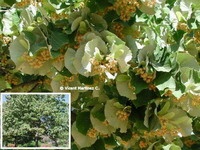 The big-leaf tilia reaches in height up to 40 m and differs from the other kinds of tilia in its bark, which is coarse and more cracked and almost black. The leaves are dark green at the upper side and light green and almost uncovered over their entire surface. The petals are outstretched aside when fully blossomed. The fruit is globular, with 4-5 budding gills, strongly woodened and stiff. Tilia is one of the most nectiferous trees. 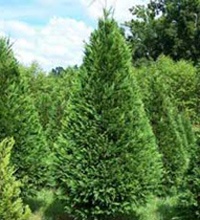 The Leyland Cypress, Cupressus x leylandii, often referred to as just Leylandii, is a fast-growing coniferous evergreen tree much used in horticulture, primarily for hedges and screens. Even on sites of relatively poor culture, plants have been known to grow to heights of 15 metres in 16 years. Their rapid, thick growth means they are sometimes used to enforce privacy, but such use can result in disputes with neighbours whose own property becomes overshadowed. 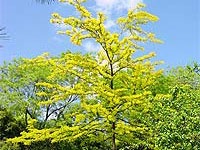 Gleditchia is a tree reaching in height up to 20 m in our country, having thorns up to 10 cm long, simple or branched, sharpened and red-brown. The leaves are pinnate or double pinnate, 20-30 cm long. The flowers are yellow-green, gathered in compact, cluster-like racemes, placed in the base of the leaves. The fruit is crescent-shaped or twisted in its length beans up to 30-45 cm long and 3-4 cm wide. It blossoms during June-July and the fruits ripen in September-October. Its origin is from North America. 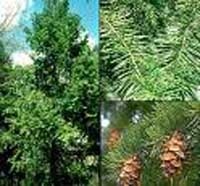 It is a coniferous tree from the pine family, 60-100 m in height. Motherland - west regions of North America. It is grown in Europe, including Bulgaria. Wood: heavy, thick, contains much resinous substances, the crown: tannin. In Bulgaria an experiment is underway for large-scale use of Pseudotsuga douglasii in forestation practice in the area of the town of Shipka.